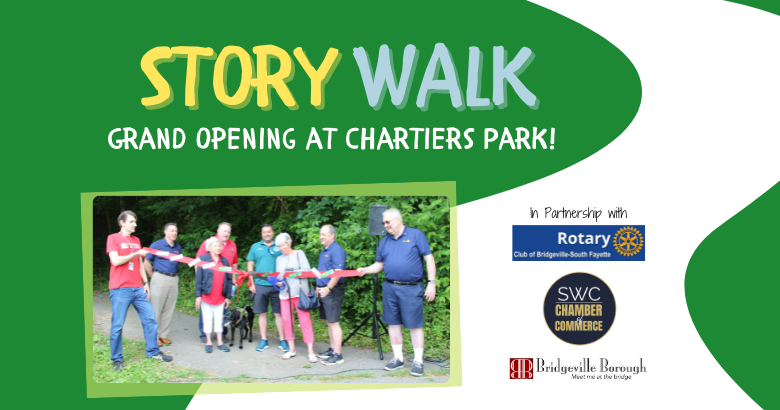 It was a beautiful day for the grand opening of Bridgeville Public Library’s StoryWalk® at Chartiers Park. The StoryWalk®, which takes the pages of a picture book and spreads them along a walking trail, was created in partnership with the Rotary Club of Bridgeville-South Fayette and the Bridgeville Borough. It is dedicated to former Rotarian, Dale Miller. The South West Regional Chamber of Commerce assisted with and advertised the dedication ceremony.

The dedication was attended by Bill Henderson, President of the Borough Council, Mandi Pryor, Executive Director of the Chamber of Commerce, members of the Rotary, and numerous members of the community. It began with speeches by Ms. Pryor and Ben Hornfeck, Director of Bridgeville Public Library, who spoke on the importance of community to the library.

Senator Devlin Robinson and Joe Verduci, both members of the Rotary, spoke about the impact that Mr. Miller had on their lives as individuals and as Rotarians.

Following the opening ceremony, Karen Verduci, the library’s Family and Youth Services Librarian, led families along the StoryWalk®, reading the featured story, The Pirates are Coming!, aloud. The walk concluded with pirate-themed crafts and snacks. Children were invited to pick out pirate treasure from our treasure chest.

The StoryWalk® at Chartiers Park is a permanent addition to the walking trail. The stories will be changed monthly, so be sure to check for new adventures.